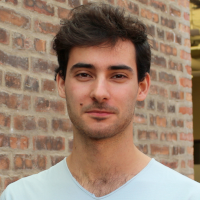 Rising third-year PhD student David Yunis began his academic career at the University of Chicago, where he earned dual bachelor’s degrees in Mathematics and Molecular Engineering. He recently took his qualifying exam and will officially be a Ph.D. candidate in the near future.

As an undergraduate, Yunis enjoyed doing math, but was frustrated by the lack of contact he had with the “real world.” He knew that if he were to stay in math, his career options would be limited. Out of curiosity, he began to think about exploring robotics. After researching robotics labs in the Chicago area, he came across TTIC, and got in contact with Professor Matt Walter. Yunis interned at TTIC with Professor Walter for some time before applying to the Ph.D. program.

“I was trying to bring some level of math into the real world, and I think machine learning right now is that place.” said Yunis.

TTIC is where he first learned about deep learning and the basic principles of machine learning. As an undergraduate working with Professor Walter and Ph.D. student Chip Schaff, he was able to work on a couple of different projects. One was on a machine learning method for wi-fi beacon deployment, and the other involved reinforcement learning to help robots walk in simulation. Thanks to his time as an intern in TTIC’s robotics lab, he gained exposure to many of the ideas that would inform his decision to pursue a Ph.D. in Computer Science.

Currently, he is highly interested in the criticism around many of the unknowns in deep learning, as far as how and why it works. As bigger and better computers and data sets emerge, it still isn’t clear why certain variations of algorithms work, and why some don’t. To a certain extent, the only way to know which algorithms will be successful and which won’t is through trial and error.

“There’s an Ali Rahimi talk about how deep learning is alchemy. He tries to draw a parallel between deep learning and optics, explaining how early microscope prototypes were also very experimental. As we started to understand what exactly was going on with optics, we built better tools. I think this is the right way to think about things. We probably have the potential to build stronger tools, if we had some kind of understanding theoretically, of what is going on [with deep learning],” he said.

Yunis enjoys working on more empirical problems, which is part of the reason he wanted to work with his advisor, Professor Karen Livescu. He knew that he didn’t want to work on purely theoretical problems, and wanted to complete some experimental work so that he could understand the proper assumptions to make in regard to his research.

The first project that he was involved in with Prof. Livescu involved a two-stage process, first training a model on a proxy task, then training it again on the task of interest. After the model sifts through a massive amount of data, the user can take the result of that training, and use it for another task.

“For example, if you have a text model, your proxy task may be next word prediction, which you can run on enormous amounts of text taken from the internet. After training for a while, you might train on the secondary task of sentiment analysis, where you classify whether a piece of text is positive or negative. The first task isn’t necessarily useful, but the second task could be used for monitoring sentiment of twitter in relation to certain stocks so as to trade better, or for identifying particular negative reviews of users. The reason one does this two-stage process is because the results on the second task often dramatically improve,” said Yunis.

One roadblock to this two-stage training procedure is that the time and energy cost of the first stage of training these models can be very high. On an industrial scale, it can cost millions of dollars to run these experiments. It would take many months on hundreds of machines, which adds the cost of the equipment on top of the massive power usage.

“With our current work, we’re hoping to develop some insight on when to stop the first stage of training, which is much more expensive than the second. Such an insight could provide a big boost in efficiency,” he said.

Yunis has enjoyed his first two years at TTIC, and is excited to officially become a Ph.D. candidate in the near future. Prof. Livescu has been a very supportive advisor, TA requirements are very low, and there is very little stress with regards to staying funded. With so few external stressors, he is able to spend more time focusing on his research and coursework. He also appreciates the ease of working with the administrative staff, and the ability to simply walk down the hall and knock on someone’s door to get something done.

At TTIC, he serves on the Diversity, Equity, and Inclusion (DEI) committee, and he is part of the Karate Club at University of Chicago as well. He wanted to join the DEI committee because of his personal experience growing up on the South Side of Chicago, not far from TTIC.

“I had some thoughts as to what TTIC could do or should be doing, and it seemed like a great opportunity or an outlet to actually be involved in institutional policy. You really don’t get this opportunity at other places,” said Yunis.

He hopes to continue exploring why deep learning works, and looking for a more efficient process to train models on large amounts of data. Yunis hopes to craft his Ph.D. thesis around this current research. As far as his future career, he is interested in exploring industrial research, but he is staying open to different possibilities.