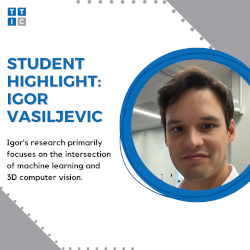 Having passed his thesis defense in June, Igor Vasiljevic will be part of TTIC’s graduating class in September. He has since started a new position as a Machine Learning Research Scientist at the Toyota Research Institute. Igor’s research primarily focuses on the intersection of machine learning and 3D computer vision, including depth estimation, multi-camera geometry, and camera calibration.

Igor completed his bachelor’s degree in Economics and master’s degree in Statistics at the University of Chicago. While Igor was a master’s student, he learned about TTIC as he became interested in the emerging field of machine learning for computer vision problems. His advisor at the University of Chicago pointed him to Prof. Gregory Shakhnarovich, who became Igor’s advisor at TTIC.

“At the time, I was working with large-scale data sets that other labs collected, which became popular benchmarks for tasks such as classifying images,” Igor said. “The progress made in classification – feeding a network a picture and having a set of reasonably accurate labels come out – was already mind-blowing to me. However, I became more interested in lower-level tasks – pixel classification seemed like the natural next step. For example, if there is a picture of a dog, instead of just telling me there’s a dog in this image, I wanted every single pixel of this image of a dog to be labeled, which is called semantic segmentation.”

After Igor spent all of his master’s and the first year of his Ph.D. working on semantic segmentation, his focus then shifted to the problem of depth estimation. Rather than just predicting a class label for every pixel, it was becoming increasingly clear to him that it would also be possible to measure scene depth as well, allowing for a dense 3D reconstruction from single images.

“At the time, the data sets that existed for depth estimation had been collected a while ago and mostly consisted of indoor college campuses and apartments, or outdoor driving data,” Igor said. “After spending a lot of time collecting our own diverse depth dataset at TTIC, which contained both indoor and outdoor scenes, we realized that the dataset was still too small to train a reliable 3D depth estimator, and that manually collecting enough real-world data for fully supervised depth estimation was too labor intensive.”

After starting his first internship at Toyota Research Institute, Igor learned more about the field of self-supervised depth learning. While labeled data sets were previously used to do depth estimation, raw video data could now be used with a self-supervision objective to train depth estimators. The focus of his research became enabling this kind of training for any kind of video data, coming from any kind of camera.

“That was the core of my thesis, to train models that can reconstruct the world with only cameras, while also expanding the class of videos that can be used,” Igor said.

Any video where the camera is moving, such as a YouTube video, allows you to take advantage of multi-view geometry, according to Igor.

“Back then, it was only data from a specific type of camera that was clean and undistorted that we could use, but we’ve expanded to many types of camera distortions such as GoPros, pinhole or fish-eye cameras. You can now buy any standard camera now and train a depth estimator by running around and collecting data,” Igor said.

Since passing his thesis defense in June, Igor moved to California to begin a new position as a research scientist at Toyota Research Institute, focusing on self-supervised machine learning.

“I remember going to a conference in 2017 and getting asked if I worked at Toyota Research Institute because I had ‘TTIC’ on my nameplate, and having to explain the differences between TRI and TTIC,” Igor said. “I continue to work in many of the same areas I did when I was a Ph.D. student, with an eye toward TRI’s specific goals, like mobility and robotics to address the challenges of aging societies.”

Igor has been spending his free time near the ocean, surfing and exploring the many beaches from Santa Cruz to San Francisco. Having spent most summers in California completing different internships since 2017, he re-discovered his love for surfing and tries to go out at least a few times a week.

“My favorite part of being at TTIC was that my time here overlapped with very impressive researchers, both students and faculty members,” Igor said. “It’s a pretty amazing place to be if you want to interact with people who are going to do really incredible research. Students have a lot of freedom to pursue their interests as well as support from faculty.”