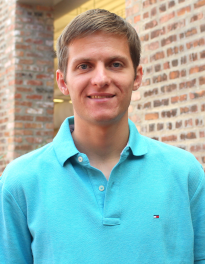 PhD Candidate Chip Schaff optimizes robotics from the inside out

Making better robots by creating hardware and software that work together

As he begins his last year at TTIC, sixth-year PhD Candidate Chip Schaff’s research focuses on co-design in robotics. His work hopes to build better robots by jointly optimizing all aspects of a robotic system. “There are many different things to consider when creating robotic systems, like whether or not it will have a certain shape, or wheels instead of legs, or what type of sensors will be placed on the robot, as well as how to program its behavior. When the robot has specific physical characteristics that complement what it is programmed to do, a much more effective product can be created,” said Schaff. Currently, he is working with his advisor, Professor Matt Walter, and Research Assistant Professor Audrey Sedal, focusing on the co-design of soft robots.

Soft robots are unique because they are made either partly or entirely from soft materials, making them much more flexible and compliant than rigid robots. When in contact with their environment, soft robots will compress and deform, making them useful in any setting requiring safe contact with surrounding objects or people. “Additionally, you can design it so that the body reacts in very specific ways to simple control signals,” said Schaff. “There’s this part that we’re using called a PneuNet, which is pneumatically actuated. When you pressurize it, like a balloon, it bends in a very specific way. You can combine these to create a type of walking or crawling gait.”

In this project, Schaff and his collaborators would like to provide evidence that co-design of simulated soft robots can create systems that outperform alternatives in the real world. To do this, the team hopes to create a soft robot that can walk forward as quickly as possible, and determine which configuration of the PneuNets along with a neural network controller produces the best results.

“One key aspect to all of these problems is that you need to be able to simulate the real world. For example, if I have this design of a robot and a controller, I need to have some idea of how that’s going to work without actually trying it in reality. Simulating soft robotic systems turns out to be quite tricky, we’re using something called a finite element method, where you approximate the dynamics of the soft thing with some mesh. We’re using a really cool open source simulator called SOFA to do this,” said Schaff.

Usually, robots are made by large teams of people, including mechanical and electrical engineers on the hardware side, and computer scientists, control theorists, and programmers working on the software. In order to succeed, they must all be able to communicate and understand each other. Something unique about the research Schaff is conducting at TTIC is that there is a very small team working on both ends collaboratively, and building robots with software and hardware designed to work well together.

The first time Schaff became interested in computer science was in a CS class his senior year of high school, and he then decided to major in CS as an undergraduate at Washington University in St. Louis. “During sophomore year of college, I took an artificial intelligence class, which went over some basic concepts on AI, as well as reinforcement learning. That’s what hooked me in. And that’s when I became really interested in both machine learning and reinforcement learning. Coming to TTIC, I decided to join the robotics lab. I thought applying reinforcement learning to problems in robotics would be an impactful and fun thing to do,” he said.

As an undergraduate student, he was able to conduct research with Professors Kilian Weinberger and Roman Garnett and really enjoyed the experience. He decided to pursue a PhD because of his passion for research, and having the ability to discover new things. In the PhD program at TTIC, not only does he get to learn more about machine learning and reinforcement learning problems, he is able to work with and learn from other people who are passionate about machine learning and robotics.

Schaff first learned about the institute during undergrad, as TTIC alum Nick Kolkin was the year above him at WashU. He was drawn to TTIC because it is so well known within the machine learning community. “You can get every facet of applications of machine learning and machine learning theory at TTIC. It seemed like a good place for my interests and a good place to get a PhD because there are very few requirements outside of just doing research. There’s also only PhD students here, so they can focus entirely on your research,” said Schaff.

The small size and focused nature of TTIC create a unique academic environment, where students are able to get to know many different people in different areas and learn from them. With research talks every week from TTIC faculty, faculty members from other leading research institutions, as well as industry professionals, there is a constant flow of new ideas that lend to the institute’s culture of inquiry.

As a student who is nearing the end of the program, his advice to new PhD students is to not rush into projects. “You have plenty of time to figure out what you want to research and what really excites you. There’s a bunch of time as a PhD student to learn and explore, and I would advise doing exactly that. Figure out exactly what it is you want to research, and read a lot of papers. Don’t worry so much about publishing in the first couple of years. Take your time figuring out what you like,” said Schaff.

Schaff hopes to work in industry after earning his PhD, whether that be in a research lab, or in an engineering role where he can apply the things that he has learned over the years. While he loves being connected to academia and staying up to date with the latest research, his passion is for making products that can be sent out into the world and make people’s lives easier.